On August 29, we had the national council of Verbo in Cuenca for their meeting, and took advantage to ordain some elders from the churches in the southern region of Ecuador. There are pros and cons to every situation- we have known most of these couples since they came into the church, and have been blessed to see their commitment and growth spiritually; so it's doubly rewarding to participate in the recognition of their years of service. On the other hand, Man! We've been around a long time! 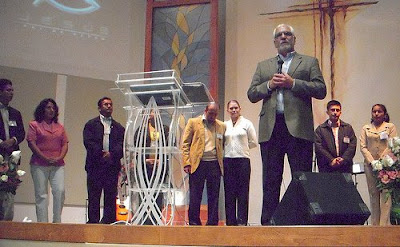 From the Cuenca church, we ordained Gustavo Cabrera and Daniel Quiroz. Gustavo has been in the church serving on the worship team for around 12 years. He is in charge of the worship team, and the radio station. In addition he has been a home group leader for years, involved in discipling many young couples in one to one relationships. We have watched him fall in love with Maria, marry, and have their first baby. 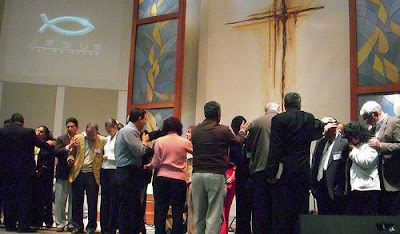 You might remember from a few posts back, that we sent Daniel and his family to Gualaquiza in April of 2007. They have been faithfully sowing in the community there- the church is growing, and they have opened a small branch of the Family Health Foundation's clinic and have a couple of doctors and a dentist giving some time to help out those with low incomes. We have sent them a basic range of medications from our “brigade” store room so they have something to offer the poor. Daniel also led home groups while in Cuenca and worked the 5:00 to 9:00 am shift at the radio station, as well as man the sound booth during church services. 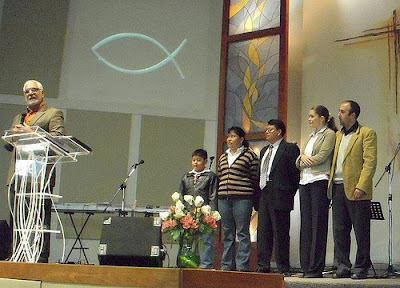 The presiding elder from each church presented each of the new elders to the congregation. Mauricio introduced Bruno from Loja, and Gregorio introduced Alfonso and Fabricio from El Guabo. Gregorio is helping out in Machala and has been covering the small group in Naranjal for some time now, so Alfonso and Fabrizio have taken the baton for the El Guabo church. We also ordained two deacons from Loja and Pasaje.
It was a wonderful to see God raising up new laborers- He is so awesome!
Posted by John and Marilyn Guido