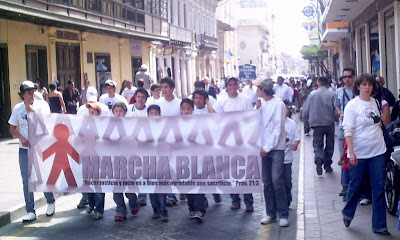 Well, it's been a busy few weeks, but we haven't disappeared. I wanted to follow up the last entry with this news about the "white march" that was held on December 8th. As we mentioned before, the families of the boys who died in the accident want to make changes on the national level. They have been researching and found a national group with the same goals, and we are hoping this connection will enable us to have the numbers needed to impact the lawmakers. At this point, the president has dismantled the congress, and has a national assembly in place who are re-writing the constitution of Ecuador, so no law writing will be taking place until they are done. 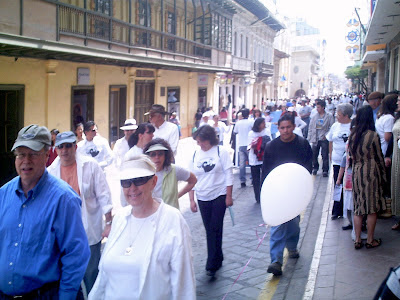 After holding a press conference, and appearing on several radio and television interviews, around 1,000 people assembled in downtown Cuenca. The participants were supposed to wear white clothing, and the purpose of the march was to bring attention to what is happening on the highways of our country in a positive way. 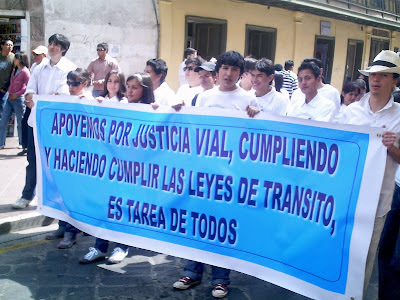 There were many groups- students who went to school with the victims, as well as their families and many groups representing other people who were unrelated to our church. This banner says: "We support justice on the highways,it is everyone's obligation to respect the laws, and everyone should be obligated to respect the laws." 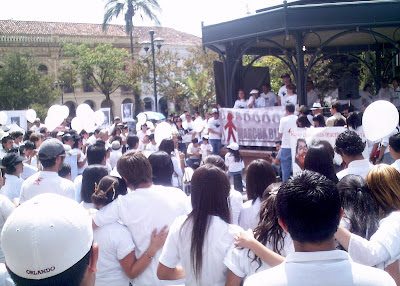 After the march we gathered in the central park of Cuenca, and we held a minute of silence, followed by a prayer for our country, and several hundred white balloons were released into the air. The parents from our church expressed their thanks to the crowd, and we met in city hall with representatives from the city government to present a declaration and a petition. This will be sent to the national assembly as well. It was a bittersweet moment.