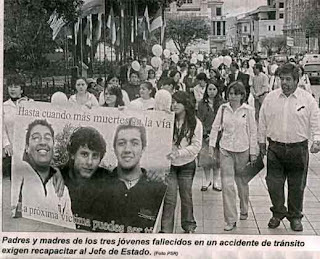 Yesterday the families of the three boys who were killed in a bus accident on August 26, along with friends and supporters had a march in downtown Cuenca, protesting the president of Ecuador's veto of a bill before the congress that would have reformed public transportation laws. It was covered in both of the local papers, El Mercurio, and El Tiempo.

We have been working closely with the families, who want to use their loss to actually make a change in the laws and the Ecuadorian government. This was the first public manifestation. They are planning a large press conference, and are hoping to involve people from all over the country who have suffered because of this type of accident. That should just about include everybody! It certainly makes you think every time you are on the road . . .
Posted by John and Marilyn Guido